Irish writer on dance, politics and culture. Dance critic with The Irish Times. Contributor to newspapers, journals, magazines and encyclopedia. Former correspondent with the Christian Science Monitor. Principal clarinettist with the RTÉ Concert Orchestra. Co-founder of the Crash Ensemble. Member of Haenjo Trio. Currently studying Politics and IR externally at LSE/UoL. Lives in Dublin with his wife and two children. 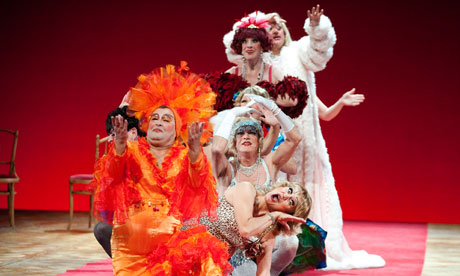 Throwing off constraints is one thing; using new-found freedom is another. The personal histories revealed by the cast of Gardenia – both in the programme notes and on-stage – consist of meandering journeys to a comfort- able acceptance of who they. But the nine performers, including seven transvestites and transsexuals in their 50s and 60s, never achieve a carefree expression of their identity.

Created by Vanessa Van Durme and directed by Alain Platel and Frank Van Laeke, Gardenia is based on the Spanish film Yo Soy Así about forced closure of a cabaret theatre in Barcelona. After a wayworn rendition of Somewhere over the Rainbow and a minute’s silence “for those who are no longer with us”, Van Durme introduces the dull-looking shirt-and-tied cast by their stage names, like “ Lily F**k-Me-Silly ”.

← Rian
Did Beyoncé step on a dancer’s toes? →